(Washington, 5/28/2012) Former British Prime Minister Tony Blair testified before the Leveson Inquiry today. He retains that familiar fatuous exuberance for failed policies and continues to deny the deadly lies he told in over a decade as Prime Minister. He was, as always, quite literally unbearable.(Image: Niecieden)

President George W. Bush had major problems selling his disastrous invasion plans for Iraq. The public smelled a rat. Strong majorities of both Democrats and Republicans opposed a preemptive invasion without confirmation of weapons of mass destruction (WMD) by UN inspectors. That was during December 2002 and January 2003. Bush needed something special to push his diabolic plan over the top. END_OF_DOCUMENT_TOKEN_TO_BE_REPLACED

Murdoch Watch – the Kiss of Death

When things don’t work out, doing business with Murdoch can be the kiss of death.

No matter how hard you try, how loyal you are, if something goes wrong, you can be sure it will be your fault.

Reporting has failed to lay the proper foundation for understanding Rupert Murdoch’s remarkable testimony before the Leveson Inquiry in London and his behavior of late.

Rupert Murdoch is a nihilist.

Murdoch’s television outlets in the United States stoked the fires for the 2003 invasion of Iraq based on outrageous misrepresentations like the idea that Saddam Hussein was responsible for the 9/11 attacks. The war cost tens of thousands of dead and seriously injured U.S. soldiers, several hundred thousand dead Iraqi civilians, and $3 trillion. (Image: acb) END_OF_DOCUMENT_TOKEN_TO_BE_REPLACED

As a result of Murdoch scandals, News Corp lost the chance to buy 100% of Sky’s shares. More troubling for the media monarch, the company may lose the 39% interest it already holds if British regulators determine that Murdoch is not a fit and proper owner. This would fuel the major News Corp shareholder suits in Delaware and New York that seek to remove Murdoch as board chairman and vastly diminish his power and that of his family and cronies.

Sky reaches 25 million viewers in 10 million homes. Revenues are growing at 10% a year with adjusted operating profit growth averaging around 16% of revenues (see 2009 through 2011). Revenues from 2012 through 2016 should top $70 billion total with adjusted operating profits around $11 billion. What happens with Sky really matters. END_OF_DOCUMENT_TOKEN_TO_BE_REPLACED

They invented and described an investigation and report that provided NoW with a clean bill of health in 2007. There’s just one problem with that assertion, according to the News International executives and outside counsel who supposedly conducted the investigation and provided a report. No such activities took place. No such report was issued.

As eavesdroppers go, next to Uncle Sam and John Bull, Rupert Murdoch, the moral force behind Fox News, is an amateur.

That’s because a global eavesdropping scheme being run today by the United States and Great Britain dwarfs anything that Rupert Murdoch’s editors at The News of The World (TNTW) ever dared attempt.

British Prime Minister David Cameron may well deny he knew TNTW was tapping the phones of members of UK’s Royal household or those of American 9/11 victims. But he can’t claim he doesn’t know his country is a partner in ECHELON, which, according to Washington journalist Bill Blum, is a “network of massive, highly automated interception stations” that is eavesdropping on the entire world.

END_OF_DOCUMENT_TOKEN_TO_BE_REPLACED

Hoare first made his claims in a New York Times investigation into the phone-hacking allegations at the News of the World. Photograph: Hazel Thompson/ Eyevine

Sean Hoare, the former News of the World showbusiness reporter who was the first named journalist to allege that Andy Coulson was aware of phone hacking by his staff, has been found dead .

Hoare, who worked on the Sun and the News of the World with Coulson before being dismissed for drink and drugs problems, was said to have been found at his Watford home.

END_OF_DOCUMENT_TOKEN_TO_BE_REPLACED

Murdoch and Vaccines: Exposure of Crimes Reveals a Much Larger Story

“… the evidence of sleazy and scandalous behavior of the Murdoch papers has expanded geometrically.” Michael Collins

Rupert Murdoch’s news empire faces intense media and legal scrutiny.  Current revelations focus on Murdoch’s News of the World hacking into the Dowler family’s voice messages during the kidnapping of their 12 year old daughter Milly, and Murdoch’s London Times for allegedly having illegally obtained the financial, property and medical information of former UK Labour Party Leader Gordon Brown during the time he was chancellor. [Image]

A 2010 exposure of Murdoch’s Times of London revealed that it had published forged documents purporting to show that Iran planned to do nuclear experiments for an atomic weapon, and as Collins points out, it was Murdoch’s “drumbeat of misinformation” that helped mislead people into believing that Saddam Hussein was involved in the 9/11 attack, supporting Bush’s invasion of Iraq, though intelligence was “unsubstantiated, contradicted, or even non-existent,” according to the Senate Intelligence Committee Unveils Final Phase II Reports on Prewar Iraq Intelligence from June 5, 2008.

But what has not yet been covered is the media circus Murdoch’s London Times created internationally as it fabricated lies against a respected British doctor, with consequences that could impact the lives of billions of children in the world.

END_OF_DOCUMENT_TOKEN_TO_BE_REPLACED 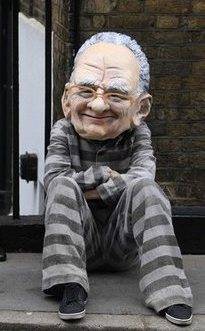 There are some crimes so universally offensive that even mentioning the suspected crime  has devastating effects.  Senator Jay Rockefeller (D-WV) raised just such a question yesterday.  In a brief press statement, the Senator said:

“The reported hacking by News Corporation newspapers against a range of individuals – including children – is offensive and a serious breach of journalistic ethics. This raises serious questions about whether the company has broken U.S. law, and I encourage the appropriate agencies to investigate to ensure that Americans have not had their privacy violated. I am concerned that the admitted phone hacking in London by the News Corp. may have extended to 9/11 victims or other Americans. If they did, the consequences will be severe.” Senator John D. Rockefeller IV, July 12

Rupert Murdoch’s News Corporation has used voicemail hacking and other forms of privacy intrusion in the United Kingdom as far back as 2002.

END_OF_DOCUMENT_TOKEN_TO_BE_REPLACED

The conservative playbook isn’t difficult to decipher. They rely heavily on the politics of resentment – point to someone in our society, claim they’re a lucky-duck using unverifiable anecdotes or cherry-picked data, and then urge people to ask, “Why does that person have it so good when I’m busting my ass to make ends meet?”

It was apparent in Ronald Reagan’s “welfare queen” rhetoric, and also in the ubiquitous references to “young bucks” buying T-bone steaks with their food-stamps. Now the Right’s using the exact same play for those greedy public employees supposedly living large on their fat salaries.

This week, the Wall Street Journal featured an excellent example of the genre by John Cogan, a fellow at the corporate-backed Hoover Institution. The piece, titled, “The Millionaire Retirees Next Door,” is a shining testament to the dishonesty surrounding our discourse on “entitlements.”