Now that there is verifiable, unambiguous evidence that the Austrian government and state prosecutors have faked criminal charges to provide a pretext to arrest and detain me, I am going to apply to the European Court of Human Rights.

END_OF_DOCUMENT_TOKEN_TO_BE_REPLACED

Reconstruction of a Mass Hysteria: The Swine Flu Panic of 2009

Swine flu kept the world in suspense for almost a year. A massive vaccination campaign was mounted to put a stop to the anticipated pandemic. But, as it turned out, it was a relatively harmless strain of the flu virus. How, and why, did the world overreact? A reconstruction.

END_OF_DOCUMENT_TOKEN_TO_BE_REPLACED

A teenage Virginia athlete is in a wheel chair now after suffering Guillain-Barre Syndrome within hours of receiving an H1N1 swine flu vaccine shot. 14-year-old Jordan McFarland developed severe headaches, muscle spasms and weakness in his legs after being injected. He will need “extensive physical therapy” to recovery, reports MSNBC. Plus, he’ll need the help of a walker for four to six weeks.

END_OF_DOCUMENT_TOKEN_TO_BE_REPLACED

Welcome to the ‘Flu World Order’

Dejavu all over again: It’s the “Flu World Order”

This report has been bugging me since I found it Tuesday morning ….

Mr. Morris Rosenberg, Deputy Minister Of Health Canada will attend the Meeting on North American Cooperation to Strengthen Response Capabilities against Influenza A (H1N1) during the fall and winter season 2009 – 2010.

Gee, just like after 9/11, eh ? Remember the secretly negotiated SPP ? (North American Union by stealth) They didn’t tell us about it until March 2005, a few days before it was signed.

END_OF_DOCUMENT_TOKEN_TO_BE_REPLACED

Around the world, police states are becoming the dominant form of government.  Even citizens from countries trained to perceive themselves as free are fast becoming aware that they are living under an ever enlarging fascist central government.  The evidence of this increasing tide of tyranny can be found internationally, from local and regional governments to federal agencies and world organizations like the World Trade Organization, The World Health Organization, Codex Alimentarius and others.  The code of law has been subverted by statutes, acts, bills, and even executive orders enacted to control (enslave) the world population.  Many have been reduced to debt slaves already.

END_OF_DOCUMENT_TOKEN_TO_BE_REPLACED 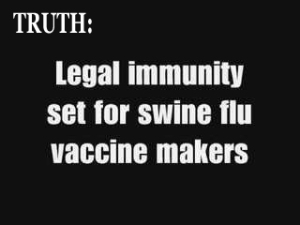 The mainstream media is engaged in what we Americans call “bald faced lies” about swine flu. It seems to be true with this issue more than any other, and it became apparent to me recently when a colleague of mine — a nationally-syndicated newspaper columnist — told me their column on natural defenses for swine flu was rejected by newspapers all across the country. Many newspapers refused to run the column and, instead, ran an ad for “free vaccine clinics” in the same space.

END_OF_DOCUMENT_TOKEN_TO_BE_REPLACED

Judges Report: France to use swine flu to commit ‘liberticide’

PARIS — In case of a swine flu pandemic the French government has a plan to introduce emergency measures that would gut legal protections for citizens, the daily Liberation reported Tuesday.

According to documents provided to the daily by a judges’ union, the plan would extend the period police can keep a suspect in detention without charge or a hearing before a judge to up to six months.

Suspects would also not be able to contact a lawyer until after spending 24 hours in custody.

Under the plan children could be tried in adult courts and more trials held behind closed doors.

END_OF_DOCUMENT_TOKEN_TO_BE_REPLACED

UK Gov rejects experts’ advice not to use Tamiflu

Experts warned dispersal of Tamiflu would do more harm than good

The government rejected advice from its expert advisers on swine flu, who said there was no need for the widespread use of Tamiflu and suggested that the public should simply be told to take paracetamol.

An independent panel set up by the Department of Health warned ministers that plans to make the stockpiled drug widely available could do more harm than good, by helping the flu virus to develop resistance to the drug.