YOU Are Too Rich 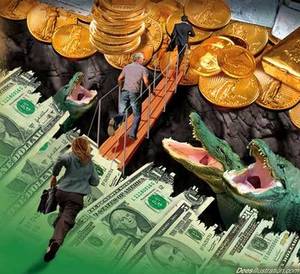 Have you stopped to wonder why it is that many government programs seem to have been set in place in order to stop job growth, stop the economy and essentially destroy wealth while politicians, complete with soap boxes, continue to shout how we must do more to help the economy?

Here is one example of how this began to take shape since the booming economy of the 90’s.

Paul R Ehrlich believes that there are too many rich people in the world. At the International Conference on Population and Development” in Cairo in 1994, he delivered a paper stating, point blank, that the rich are burdens on global resources, and if we, as a people were to survive, we would have to ensure that everyone cuts his/her energy consumption, drastically.

Through one of the organizations he founded, “Zero Population Growth” now “Population Connection,” he was introduced to a large amount of influence through his meeting with James C. Hormel, heir of the Hormel Foods Corporation, who is also the director for “People of the American Way,” donor to Media Matters, and is ambassador to Luxemburg.

Here is where the policy begins to become influenced. James C Hormel, as director of the progressive group, “People for the American Way” and donor to “Media Matters” is in a position to dictate which policies are pushed.

Hormel believes that the average citizen has too much money, and as a result, we are a burden on our planet! With former Vice President Al Gore pushing for the carbon credit scam (where people pay much extra for the usage of energy while the wealthy investors profit, NOT the planet), we can see the roots exposed just a bit.

Briefly, here are some of the roots that lead us to today, and will continue to lead us into a worse position tomorrow. During the late 90’s the housing bubble began through the policy of forcing banks to lend money to people who had no ability to repay the loans. The “Give Back” was that most of these loans would be insured by Fanny Mae or Freddy Mack. We all know how well that worked out. Then, once the housing bubble finally melted, Fanny and Freddy needed a bail out. So, the Federal Reserve began to print billions of paper dollars, essentially making our money worth much less. With the banks collapsing, Congress passed bailouts, and an additional bit of “Quantitative Easing” where Federal Reserve Chair Ben Bernanke printed up more money to buy US treasuries to help keep the US Credit rating high enough so that foreign investors would not refuse to lend our government more money. This additional money was given to NY Fed Chair William C Dudley who used it to purchase the treasuries from Goldman Sachs, a large bailout recipient.

*Side note: William C Dudley used to be on the board of Goldman Sachs before taking a job with the Federal Reserve.* Bear in mind that Goldman Sachs made a profit on the sale of the treasuries.

Tomorrow, we will be having to deal with other harsh realities. Politicians in DC are now speaking about how the rich are not paying their fair share. Yet, there is dead silence on the overspending bureaucracy that has wasted the wealth of the richest nation, in the world. (Hard to continue to say that the US is the richest when all of the unsecured promises the US has promised to pay add up to hundreds of trillions.)

Now, here are some of the simple realities of where we are headed.

The price of oil is set by people who do not have the best interest of the US in mind.

Our nation’s politicians want to continue to spend money our nation does not have so that they can continue to be re-elected.

Those in a position to offer jobs will be taxed to the point where there will be no additional private sector jobs offered, and the only jobs that will be offered will be paid for with money borrowed.

It is only a matter of time before the interest rates begin to rise, and when they do, the economy of the US will effectively stop.

Currently, you are STILL too rich, according to those driving public policy, but soon, very soon, you will be so poor that you will not be able to afford more than the 3 KWH that Paul R Ehrlich believes is an appropriate amount of energy to use.

7 responses to “YOU Are Too Rich”