The Gulf of Mexico oil disaster has caused the biggest chemical poisoning crisis in US history, experts say 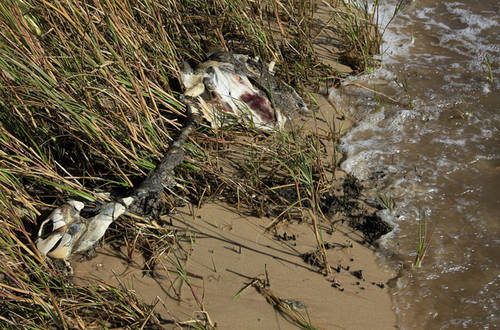 April 20, 2011 marks the one-year anniversary of BP’s catastrophic oil disaster in the Gulf of Mexico. On this day in 2010 the Deepwater Horizon oil rig exploded, causing oil to gush from 5,000 feet below the surface into the ninth largest body of water on the planet.

At least 4.9 million barrels of BP’s oil would eventually be released into the Gulf of Mexico before the well was capped 87 days later.

It is, to date, the largest accidental marine oil spill in the history of the petroleum industry. BP has used at least 1.9 million gallons of toxic dispersants to sink the oil, in an effort the oil giant claimed was aimed at keeping the oil from reaching shore.

Critics believe the chemical dispersants were used simply to hide the oil and minimise BP’s responsibility for environmental fines.

Earlier this month Transocean Ltd, the owner of the Deepwater Horizon, gave its top executives bonuses for achieving what it described as the “best year in safety performance in our company’s history”. Transocean CEO Steve Newman’s bonus was $374,062.

BP has plans to restart deepwater drilling on 10 wells in the Gulf of Mexico this summer after being granted permission by US regulators.

Meanwhile, marine and wildlife biologists, toxicologists, and medical doctors have described the impact of the disaster upon the environment and human health as “catastrophic,” and have told Al Jazeera that this is only the beginning of that what they expect to be an environmental and human health crisis that will likely span decades.

The demise of gulf vertebrates

Less than four months after the disaster began, very large fish-kills began to appear along the coasts of Louisiana, Mississippi, Alabama, and Florida.

On August 18, a team from Georgia Sea Grant and the University of Georgia released a report that estimated 70-79 per cent of the oil that gushed from the well “has not been recovered and remains a threat to the ecosystem”. More recent studies estimate that figure could be closer to 90 per cent.

Dr Ed Cake, a biological oceanographer, as well as a marine and oyster biologist, has “great concern” about the fish kills over the last year, which he feels are likely directly related to the BP oil disaster.

In recent months, more than 290 corpses of dolphins and their newborn have washed ashore in the areas of the Gulf most heavily affected by the disaster, along with scores of dead endangered sea turtles.

On May 20 of last year, the US Environmental Protection Agency (EPA) told BP it had 24 hours to find a less toxic alternative to its dispersants, but the EPA’s request was ignored.

Then on May 25, BP was given a directive by the EPA to scale back their spraying of the Gulf of Mexico with dispersants. The US Coast Guard overlooked the EPA’s directive and provided BP with 74 exemptions in 48 days to use the dispersants.

The dispersants are banned in at least 19 countries, including the UK.

Cake’s assessment for sea turtle and dolphin populations in the Gulf is bleak.

Underscoring his concern, a new study published in Conservation Letters this March reveals that the true impact of BP’s oil disaster on wildlife may be gravely underestimated.

The study argues that fatality figures based on the number of recovered animal carcasses will not give a true death toll, which may be 50 times higher than believed since most carcasses sink before they are spotted.

Cake believes the National Marine Fisheries Service and National Oceanic and Atmospheric Administration (NOAA) have been remiss in determining the cause of the deaths.

“In the year since the spill began, NOAA admits to doing no tissue sampling, which to me is scientifically incredible, for if you have forensic samples, you are bound by protocols to have them analysed right away so they do not degrade, unless your purpose is not to know what is killing these dolphins”, he said.

In February the Obama administration, via the National Marine Fisheries Service, issued a gag order to force marine scientists who were contracted to document the spikes in dolphin mortality and to collect specimens and tissue samples to keep their findings confidential.

Dolpins and sea turtles can be considered the canaries in the coalmine in the Gulf since they are at the top of the food chain and directly reflect what is happening to the marine environment in which they live.

Ed Cake, a biological oceanographer, as well as a marine and oyster biologist, has “great concern” about the fish kills over the last year, which he feels are likely directly related to the BP oil disaster.

“Adult dolphins systems are picking up whatever is in the system out there, and we know the oil is out there and working it’s way up the food chain through the food web and dolphins are at the top of that food chain.”

Cake explained: “The chemicals then move into their lipids, fat, and then when they are pregnant, their young rely on this fat, and so it’s no wonder dolphins are having developmental issues and still births”.

Since last fall, Dr Wilma Subra, a chemist and Macarthur Fellow, has been conducting tests on seafood and sediment samples along the Gulf for chemicals present in BP’s crude oil and toxic dispersants.

Cake, who lives in Mississippi, said:

It has been more than 31 years since the 1979 Ixtoc-1 oil disaster in Mexico’s Bay of Campeche, and the oysters, clams, and mangrove forests have still not recovered in their oiled habitats in seaside estuaries of the Yucatan Peninsula.

It has been over 21 years since the 1989 Exxon Valdez oil disaster in Alaska, and the herring fishery that failed in the wake of that disaster has still not returned.

From a biological oceanographer’s perspective, we are still in the short-term impact stage of BP’s oil disaster. Cake, who is 70-years-old, said:

Toxic chemicals ‘in the air’

Two-year-old Gaven Tillman of Pass Christian, Mississippi, has been diagnosed with severe upper respiratory, sinus, and viral infections. His temperature has reached more than 39 degrees and he has been sick since last September.

“We expected to find BP’s toxins in our bodies after working in the VOO [Vessels of Opportunity] program,” she added, “But we did not expect our two-year-old grandson to test positive for having them too, with levels higher than ours. He has not been to the beach and has not eaten any seafood. Therefore, it is in the air.”

Solvents dissolve oil, grease, and rubber”, she continued, “It should be no surprise that solvents are also notoriously toxic to people, something the medical community has long known”.

“They evaporate in air and are easily inhaled, they penetrate skin easily, and they cross the placenta into fetuses.”

“For example, 2- butoxyethanol [in BP’s Corexit dispersants] is a human health hazard substance; it is a fetal toxin and it breaks down blood cells, causing blood and kidney disorders”, Ott said.

Since last July, Al Jazeera has spoken with scores of Gulf residents, fishermen, and clean-up workers who have blamed the aforementioned symptoms they are experiencing on the chemicals from BP’s oil and dispersants.

According to chemist Bob Naman, these chemicals create an even more toxic substance when mixed with crude oil.

Aguinaga’s health has been in dramatic decline.

Most of the human blood Dr Subra has tested has toxic chemicals present at levels several times higher than the national average.

Ethylbenzene is a form of benzene present in the body when it begins to be broken down. m,p-Xylene is a clear, colorless, sweet-smelling, flammable liquid that is refined from crude oil and is primarily used as a solvent.

Al Jazeera asked Subra what she thought the local, state and federal governments should be doing about the ongoing chemical exposures.

Dr Mike Robicheux is a doctor in Louisiana who has been treating scores of people he says are being made sick from BP’s toxic chemicals.

Robicheux says new patients from the exposure are coming into his office daily, and believes that the broader medical community across the Gulf Coast are either unwilling or unable to deal with the crisis.

Robicheux, who has appealed to the US Centers for Disease Control and Prevention for help, said:

“The medical community has shut this down…They either don’t understand or are afraid to deal with it properly because they are afraid of the oil and gas industry.”

“This is the biggest public health crisis from a chemical poisoning in the history of this country,” Robicheux told Al Jazeera, “We are going to have thousands of people who are extremely sick, and if they aren’t treated, a large number of them are going to die.”