“National Security” versus “Food Insecurity”: One in Seven Hungry in America as Obama Prepares for Syrian War

The number of starving US citizens during Obama’s terms in office is a whopping one in seven, worse than the global average of one in eight. As he continues to pour several hundred billion dollars into the Middle East war theater that will likely soon include Syria, Congress wants to cut $40 billion in food aid to its constituents.

END_OF_DOCUMENT_TOKEN_TO_BE_REPLACED

Last week, the University of Missouri announced a new method to detect silver nanoparticles in fresh produce and other food products. Though not mentioned by researchers, it’s conceivable that the protocol could be modified to test for chemtrail dispersants, as well, since the particles dispersed are in the nano size range, measured in billionths of a meter.

Over 200 agricultural pesticides contain nanosilver, which studies have shown to be toxic to humans, under certain conditions. Over 1,600 consumer products are known to contain nanoparticles, ranging from clothes to cleaning agents, to food, cosmetics, and drugs; but with no regulatory requirement to disclose, the real number is likely far higher by orders of magnitude.

END_OF_DOCUMENT_TOKEN_TO_BE_REPLACED

To protect against genetic contamination, a group of ecodefenders destroyed 6,000 genetically modified beets in Jackson County, Oregon earlier this month. The FBI is involved and has deemed the act “economic sabotage,” despite that Syngenta is creating products that economically destroy organic crops through genetic contamination and pesticide aerial drift.

When cross contamination occurs, then our corrupt judicial system blames the victim farmer who is ordered to pay Monsanto for the company’s failure to control its frankenseeds that contaminated her organic crops.

END_OF_DOCUMENT_TOKEN_TO_BE_REPLACED

Food rights activists from around North America will meet at the Sauk County Courthouse in this tiny town on May 20 to support Wisconsin dairy farmer Vernon Hershberger and food sovereignty. Hershberger, whose trial begins that day, is charged with four criminal misdemeanors that could land this husband and father in county jail for up to 30 months with fines of over $10,000.

END_OF_DOCUMENT_TOKEN_TO_BE_REPLACED

How Congress let Monsanto off the hook

Not many people like the messes Congress makes but everybody should see how they’re made.

This article takes a close look at the legislation just passed by Congress and signed by President Obama allowing the Secretary of Agriculture to issue executive orders that bypass regulations, safety, and science for the purpose of speeding genetically modified organisms (GMOs) and genetically engineered seeds (GE) and crops to market.  The way the law is written, Secretary Tom Vilsack can lift restrictions on GMOs for a set period and, it appears, do so without hindrance from the courts.

END_OF_DOCUMENT_TOKEN_TO_BE_REPLACED

The US Food & Drug Admin. just approved a drug made from genetically modified carrots to treat Gaucher, a rare disease found mostly among Ashkenazi Jews. Out of a global population of 6.8 billion, an estimated range of 600,000 to a million carry the recessive gene for it, though not all are symptomatic.

The incidence of Gaucher is so rare, in fact, that to approve a GMO carrot for this purpose makes no sense, raising the specter of some unstated plan.

As expected when humans ingest active foreign DNA, one of the side effects of the FDA-approved drug, Elelyso®, is anaphylactic shock, among other allergic reactions.

END_OF_DOCUMENT_TOKEN_TO_BE_REPLACED

Stroller-pushing mothers delivered nearly a million signatures in Sacramento on Wednesday, for an initiative to put to populist vote The California Right to Know Genetically Engineered Food Act.

The ten-week signature drive collected nearly double the amount needed to put the R2K Act on the November 6, 2012 ballot.

The state will take between five and seven weeks to validate the signatures, and then certify the results. Of the 555,236 needed, thousands of volunteers collected 971,126, just shy of the hoped-for million.

“In ten weeks, nearly a million registered voters signed the ballot initiative,” said Pamm Larry, who single-handedly started the drive on January 20, 2011. “Even biotech engineers gathered signatures for us.”

Having founded LabelGMOs.org, Larry then coordinated with other pro-labeling civic groups across the state and nation.

If voters approve the measure this fall, beginning July 1, 2014, food makers will be required to label those products that contain genetically modified ingredients.

END_OF_DOCUMENT_TOKEN_TO_BE_REPLACED

France bans GM corn amid mass US protests against Monsanto

Amid mass US protests against Monsanto yesterday, France imposed a temporary moratorium on the planting of Monsanto’s genetically modified corn, MON810.

“Due to the proximity of the planting season,” said Agriculture Minister Bruno Le Maire along with Francois Fillon, Minister for Ecology and Sustainable Development, in a press release on Friday, authorities “decided to take a precautionary measure to temporarily prohibit the cultivation of maize MON810 on the national territory to protect the environment.”

­All prior plantings of MON810, trade name YieldGard, become illegal on March 20.

END_OF_DOCUMENT_TOKEN_TO_BE_REPLACED

The first ever lawsuit concerning risks of nanotechnology was filed in federal court last month when several groups jointly sued the US Food and Drug Administration for its lack of response to a 2006 petition demanding that products with nanomaterials be labeled and their affects tested for safety. [Image]

END_OF_DOCUMENT_TOKEN_TO_BE_REPLACED 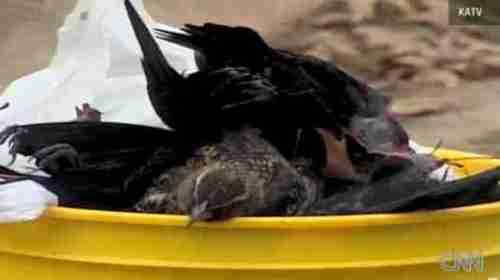 Little Rock television station KATV showed a radar image of a large mass over the Arkansas town and said that hundreds of birds had died, reports the Associated Press. Other news reports indicate only “dozens” were found.

END_OF_DOCUMENT_TOKEN_TO_BE_REPLACED

Less than a year after Frito-Lay announced plans to make half their products without “any artificial or synthetic ingredients,” the $13 billion company was sued last week in federal court for fraudulently marketing the snacks that contain genetically modified ingredients.

END_OF_DOCUMENT_TOKEN_TO_BE_REPLACED

Is establishment medicine an injurious scam?

Abstract — Establishment medicine is sustained by a triad of core deceptions: (1) An apical lie by omission which does not admit that the predominant causal determinant of an individual’s health is the individual’s real and perceived place in the society’s dominance hierarchy, (2) the “voodoo lie” of the false scientific foundation of its professional practice which does not admit that most of medical research used to justify the recommended “treatments” is wrong and that consequently the “treatments” are ineffective at best, and (3) the dirty secret that establishment medicine (in North America) is itself the third leading cause of death, after cancer and cardiovascular failures for which medicine is of little use. All three core deceptions have been decisively exposed by leading-edge mainstream researchers whose works have had virtually no impact in reforming the profession.

END_OF_DOCUMENT_TOKEN_TO_BE_REPLACED

Global milk war ramps up as citizens face off with regulators

The battle for food freedom intensifies across the planet as citizens assert their right to raw dairy products unadulterated by drugs and genetically modified ingredients – in the face of authorities seeking to restrict our food choices and to criminalize entrepreneurs who operate outside the monopolized factory food system.

The State of Maine recently sued farmer Dan Brown for selling food and milk without State licenses, despite a local law that permits it. “Blue Hill is one of five Maine towns to have passed the Local Food and Community Self-Governance Ordinance,” explains Family Farm Defenders.

END_OF_DOCUMENT_TOKEN_TO_BE_REPLACED

Talk about dying to get your freedom.  Dana Beal, a well-known drug war activist, literally did just that on his way to the slammer.   Beal — one of the founders of the Yippee movement and chief organizer of the Global Marijuana March was busted in Wisconsin for possessing 169 pounds of medical marijuana.  Earlier this year he was sentenced to five years, half to be served in prison and half on probation.

He had served 9 months, but soon after being sentenced and on his way to prison, a strange thing happened to him; he had a heart attack and claims he died.  Miraculously he was revived and treated and then the authorities calculated the consequences of keeping Dana in prison.  He needed heart surgery and they decided it was too costly and voided the remainder of his prison sentence.

END_OF_DOCUMENT_TOKEN_TO_BE_REPLACED

By The Canary Party

We are excited that the film makers of The Greater Good have decided to make their film free online for one week. This film examines the vaccine injury controversy at a level that people new to the topic can digest. We strongly encourage you to let your friends a family know about this chance to see the film for free this week. http://vimeo.com/31036452

And come to the Southeast Regional Canary Meeting, December 2-4, 2011, at the Hyatt Garland Place in Garland, TX (Dallas area).

END_OF_DOCUMENT_TOKEN_TO_BE_REPLACED

Declaration of the Occupation of New York City 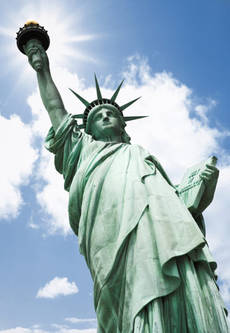 This document was accepted by the NYC General Assembly on September 29, 2011:

As we gather together in solidarity to express a feeling of mass injustice, we must not lose sight of what brought us together. We write so that all people who feel wronged by the corporate forces of the world can know that we are your allies.

As one people, united, we acknowledge the reality: that the future of the human race requires the cooperation of its members; that our system must protect our rights, and upon corruption of that system, it is up to the individuals to protect their own rights, and those of their neighbors; that a democratic government derives its just power from the people, but corporations do not seek consent to extract wealth from the people and the Earth; and that no true democracy is attainable when the process is determined by economic power. We come to you at a time when corporations, which place profit over people, self-interest over justice, and oppression over equality, run our governments. We have peaceably assembled here, as is our right, to let these facts be known.

END_OF_DOCUMENT_TOKEN_TO_BE_REPLACED 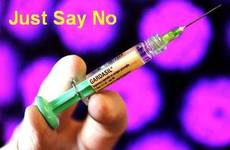 SANE Vax tested 13 vials of the Gardasil vaccine, from six different countries, and found that all were contaminated with genetically modified HPV DNA. The vaccine maker Merck, has claimed for the last five years on the package insert that the vaccine contains NO viral DNA. That claim quietly disappeared from the insert this past April, without any explanation, warning or notice being offered to the pubic.

END_OF_DOCUMENT_TOKEN_TO_BE_REPLACED

Vaccinating children at school, out of the sight of parents, who will never know it even happened?  It is a vaccine maker’s dream!  No pesky questions to answer, no parents armed with research on efficacy and adverse reactions, just a kid you can scare by telling them if they don’t get the shot, they are gonna get cancer.

It is about to become reality in California.  The bill has passed allowing 12 year olds and up to be vaccinated with Hepatitis B and Gardasil with out parental knowledge or consent, and is awaiting Governor Brown’s signature.

END_OF_DOCUMENT_TOKEN_TO_BE_REPLACED

HDNet World Report, the Emmy Award-winning national news program, takes an in-depth look at the mixed signals sent by the U.S. Government to families who believe that their children developed autism as a result of vaccinations gone bad. Public health officials in the U.S. have consistently denied that there is any link between childhood vaccines and autism; however, some families have actually received money from the government to fund long term care for their autistic children.

END_OF_DOCUMENT_TOKEN_TO_BE_REPLACED

Beyond Protest: Saving our planet with ‘Deep Green Resistance’ 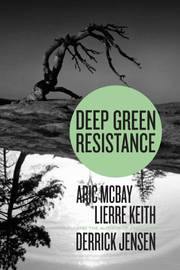 From what makes an effective resister to effective resistance strategies, in Deep Green Resistance, Aric McBay, Lierre Keith and Derrick Jensen lay out the reasons for and methods of bringing down industrial civilization.  The goal is saving the biosphere, and with it, Homo sapiens.

DGR agrees: “It means thoroughly destroying the political, social, physical, and technological infrastructure that not only permits the rich to steal and the powerful to destroy, but rewards them for doing so.”